"If God speaks to man, he undoubtedly uses the language of mathematics."
- Henri Poincare*

[17:36] You shall not accept any information, unless you verify it for yourself. I have given you the hearing, the eyesight, and the brain, and you are responsible for using them.

The Quran is intended to be an eternal miracle. The highly sophisticated mathematical system based on prime number 19 embedded into the fabric of the Quran ( decoded between 1969-1974 with the aid of computers), provided verifiable PHYSICAL evidence that "The Book is, without a doubt, a revelation from the Lord of the universe." (32:2), and incontrovertibly ruled out the possibility that it could be the product of a man living in the ignorant Arabian society of the 7th century. It also proved that no falsehood could enter into the Quran, as promised by God.

"To ascertain that they fully delivered their Lord's messages, He protectively enveloped what He entrusted them with and He counted the numbers of all things ." 72:28 (7+2+2+8)

According to Benford's discovery, if you count any collection of objects - whether it be pebbles on the beach, the number of words in a magazine article or dollars in your bank account - then the number you end up with is more likely to start with a "1" than any other digit. Somehow, nature has a soft spot for digit "1". Benford was not the first to make this astonishing observation. 19 years before the end of 19th century, the American astronomer and mathematician, Simon Newcomb, noticed that the pages of heavily used books of logarithms were much more worn and smudged at the beginning than at the end, suggesting that For some reason, people did more calculations involving numbers starting with 1 than 8 and 9.

He conjectured a simple formula: nature seems to have a tendency to arrange numbers so that the proportion starting with the digit D is equal to log10 of 1 + (1/D).

Newcomb`s observations were then virtually ignored until 57 years later when Frank Benford, a physicist with the General Electric Company, published his paper. (Bedford, F. "The Law of Anomalous Numbers." Proc. Amer. Phil. Soc. 78, 551-572, 1938). He rediscovered the phenomenon and came up with the same law as Newcomb. Conducting a monumental research, he analyzed 20229 set of numbers gathered from everywhere from listings of the areas of rivers to physical constants and death rates, he showed that they all adhere to the same law: around 30.1 per cent began with the digit 1, 17.6 per cent with 2, 12.5 per cent with 3, 9.7 per cent with 4, 7.9 percent with 5, 6.7 percent with 6, 5.8 per cent with 7, 5.1 percent with 8 and 4.6 percent with 9.

Benford's law is scale-invariant (the distribution of digits is unaffected by changes of units) and base-invariant. In fact in 1995, 114 years after Newcomb's discovery, Theodore Hill, proved that any universal law of digit distribution that is base invariant has to take the form of Benford's law ("Base invariance implies Benford's law", Proceedings of the American Mathematical Society, vol 123, p 887).

In applying Benford's law three rules should be observed: first the sample size should be big enough to give the predicted proportions a chance to show themselves so you will not find Benford's law in the ages of your family of 5 people. Second, the numbers should be free of artificial limits so obviously you cannot expect the telephone numbers in your neighborhood to follow Benford's law. Third, you don't want numbers that are truly random. By definition, in a random number, every digit from 0 to 9 has an equal chance of appearing in any position in that number.

This fascinating mathematical theorem is a powerful and relatively simple tool for pointing suspicion at frauds, embezzlers, tax evaders and sloppy accountants.

The income tax agencies of several nations and several states have started using detection software based on Benford's Law to detect fabrication of data in financial documents and income tax returns.

Application to the Quran:

The Quran is divided into chapters of unequal length, each of which is called a sura.

The shortest of the suras has ten words, and the longest placed second in the text, has over 6000 words. From the second sura onward, the suras gradually get shorter, although this is not a hard and fast rule. The last sixty suras take up about as much space as the second . This unconventional structure does not follow people's expectations as to what a book should be. However it appears to be a deliberate design on the part of the author of the Quran.

Quran consists of 114 suras. Each sura is composed of a certain number of verses, for example sura 1 has 7 verses and sura 96 (the first sura revealed to Prophet Muhammad) has 19 verses. So we have a set of 114 data to which we can apply Benford's law. The result is shown in the following tables: 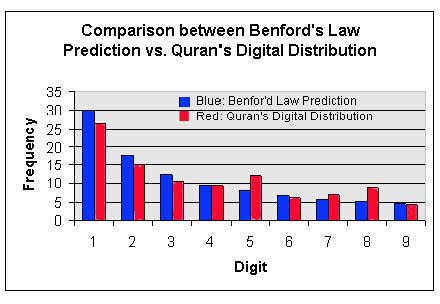 This data also conforms to the Quran’s code:

Is it a mere coincidence?

We observed that Group one contains 30 suras. Remember that number 30 is the 19th composite number. Number 30 appears to have a crucial role in Quran’s mathematical system. The only time that number 19 is mentioned in the Quran is verse 30 (sura 74). Also note that the number of suras (114=19*6) is immediately preceded with 30th prime number (113). Furthermore 19th prime is 67 and sura 67 happens to have 30 verses (Group three). Also see Editor’s Note #2 in The End of the World, Coded in the Quran.

Another fascinating feature of Group one reveals itself when we arrange the suras in the chronological order of revelation; Sura 82 with 19 verses fits into the 19th place.

Henri Poincare:* Mathematician, born in Nancy, France. He studied at Paris, where he became professor in 1881. He was eminent in physics, mechanics, and astronomy, and contributed to many fields of mathematics. He created the theory of automorphic functions, using new ideas from group theory, non-Euclidean geometry, and complex function theory. The origins of the theory of chaos are in a famous paper of 1889 on real differential equations and celestial mechanics. Many of the basic ideas in modern topology, triangulation, and homology are due to him. He gave influential lecture courses on such topics as thermodynamics, and almost anticipated Einsteins's theory of special relativity, showing that the Lorentz transformations form a group. In his last years he published several books on the philosophy of science and scientific method, and was also well known for his popular expositions of science.