Although the Quran is very clear that Abraham is the founder of Islam (22:78) and the one who received all the rituals of Islam, most of the traditional Muslims reject this Quranic notion. Please see our file Who founded Islam? Salat as we know it today was given to Abraham who taught it to his children and they taught it to their children and so on. Prophet Muhammad was commanded to follow the Religion of Abraham. Had the religion of Abraham not known to him, we would not expect God to command him to follow it.

[16:123]"Then we inspired you (O Muhammad) to follow the religion of Abraham, monotheism; never was he an idol-worshiper."

[19:59] "After them, He substituted generations who lost the Contact Prayers (Salat), and pursued their lusts. They will suffer the consequences."

Quran conforms that Salat was lost after some generations for the people of the book. Losing it involved changing it in every aspect. The Salat as practiced today by most of the Jews and Christians is different than what was given to their prophets. Very few Jews and Christians have maintained the inherited Salat.

In a book entitles "To Pray as a Jew" I found a lengthy explanation of the Prayers as done by the ancient Jews and few of the contemporary Jews. In this book the author put diagrams showing the movement and positions during the prayer. One look at these illustrations is enough for the Muslims to realize the similarity of the prayers of the Jews then and Salat as practiced by the Muslims. 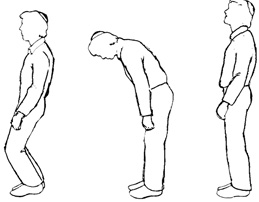 In his comment about these positions the author wrote : "In most contemporary congregations very few people keep to the tradition of falling prostrate. Sometimes it is only the Prayer leader and the rabbi who does so. In more traditional congregations, however, some worshipers, men and women, will join the Prayer Leader and rabbi in the act of prostrating themselves. In Israeli synagogues, the practice is more widespread than in synagogues elsewhere. Since this is a position that we are unaccustomed to, one who has never done this before might very well demur. But once accomplished, the experience provides such a spiritual uplift that one looks forward to repeating it. Those willing to try this ancient ritual form on the rare occasions that call for it might welcome the following diagrams of the correct procedure"

It is also interesting to learn from this book that the prayers of the Jews involve wash before the prayers, (like Wuduu or ablution for Muslims), and the call for Prayers (like the Azan for the Muslims).

Title: To pray as a Jew : a guide to the prayer book and the synagogue service / Hayim Halevy Donin

Saw your article about the similarities between Muslim and Jewish prayer. Are you aware that Karaite Jews and some Orthodox Messianic (follow Yeshua/Isa's teachings) fall prostate? Karaites remove their shoes, bath the hands and feet, and stand throughout prayer?

Interesting huh? Shame on us for bringing Father Avraham/Ibrahim's family into disgrace with our hate of each other. I believe we shall have much to answer before him on the Day of Judgement.