When the mathematical miracle of the Quran was discovered by Dr. Khalifa in the early 1970's, the Muslim world treated him like a hero. He was invited to appear on TV shows and give many Radio talks. The news of the miracle was published in many newspapers and magazines in the Islamic world. The mathematical miracle of the Quran was included in the Islamic classes taught in some of the Islamic Universities. Many famous Muslim scholars tried to be part of it by writing about it and discussing it on their talk shows or classes.

The Mathematical Miracle as covered by Ahmed Deedat.

Dr. Khalifa subsequently declared the truth and his conviction that the miracle of the Quran also confirms that Quran alone is the only source for religious law in Islam. It confirmed also that Hadiths and Sunna books are corrupted beyond belief and have no more than their historical value. A value that reflects many errors, innovations and distortion of the true Islam. Since then, the same scholars who praised Dr. Khalifa for the discovery of the miracle attacked him , his views and tried to discredit the mathematical miracle of the Quran.

One of the techniques they used in their attempt to discredit the miracle of the Quran, was to dispute the number of letters in the Basmallah (Bismillah) ( verse one of sura one) (1:1). They failed to understand that the mathematical miracle of the Quran has never been dependent on one factor only and some of the great discoveries have no dependence whatsoever on alphabets but rather on the numbers used in the Quran. The scholars thus claimed the Basmallah does not contain nineteen letters hoping to destroy the miracle of the Quran and the credibility of Dr. Khalifa , he obtained from the mathematical structure. A meeting of some of the most prominent scholars was convened in Saudi Arabia and after long discussion they declared that they do not really know how many letters are in Basmallah. According to them, the count of the letters could be 21 or 23 but NOT 19. !!!!

However, in the past few years two well known Sunni leaders, former Director of the Islamic Center in Washington DC and the other the director of the Islamic Center of Orange county, California answered a question about the meaning of 786 that is usually used to indicate the Basmallah (Bismillah). Both of them answered for the truth unaware or having forgotten earlier attempts, by traditional Muslims who are dismayed by the Quranic miracle and other scholars in in Saudi Arabia, to declare Basmallah as having "unknown number of letters". The leaders without thinking , forced by God Almighty to speak the truth that the number of letters in Basmallah are nineteen. Here is one of these questions which is still posted on one of the Pakistani discussion boards.

Q 2. I never quite understood the idea behind the number "786". Is it possible for you to explain its significance at your earliest convenience? (Asim)

A 2. "786" is the total value of the letters of "Bismillah al-Rahman al-Rahim". In Arabic there are two methods of arranging letters. One method is the most common method known as the alphabetical method. Here we begin with Alif, ba, ta, tha etc. The other method is known as the Abjad method or ordinal method. In this method each letter has an arithmetic value assigned to it from one to one thousand. The letters are arranged in the following order: Abjad, Hawwaz, Hutti, Kalaman, Sa'fas, Qarshat, Sakhaz, Zazagh. This arrangement was done, most probably in the 3rd century of Hijrah during the 'Abbasid period, following other Semitic languages such as Phoenician, Aramaic, Hebrew, Syriac, Chaldean etc.

If you take the numeric values of all the letters of the Basmalah, according to the Abjad order, the total will be 786. In the Indian subcontinent the Abjad numerals became quite popular. Some people, mostly in India and Pakistan, use 786 as a substitute for Bismillah. They write this number to avoid writing the name of Allah or the Qur'anic ayah on ordinary papers. This tradition is not from the time of the Prophet -peace be upon him- or his Sahabah. It developed much later, perhaps during the later 'Abbasid period. We do not know of any reputable Imams or Jurists who used this number instead of the Bismillah.

Earlier Muslim scholar Fakhreddin Ar-Razi, in his famous book et-Tafsir-ul Kabir, links the 19 letters of Basmalah with 19 guardians of Hell. Other scholars did not question the number of letters in Basmalah until after the discovery of the the mathematical miracle of the Quran.

To read about the history of the gematrical value of letters, Please see What is a numeral?

Here is a table explaining the above answer 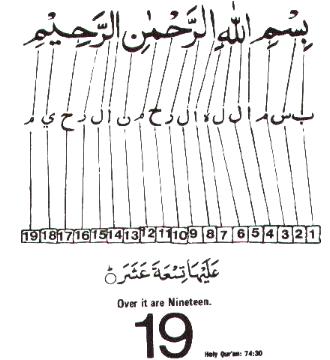