[43:3] We have rendered it an ARABIC Quran, that you may understand.

[13:37] We revealed these laws in ARABIC, and if you ever acquiesce to their wishes, after this knowledge has come to you, you will have no ally, nor a protector, against GOD.

[20:113] We thus revealed it, an ARABIC Quran, and we cited in it all kinds of prophecies, that they may be saved, or it may cause them to take heed.

[46:12] Before this, the book of Moses provided guidance and mercy. This too is a scripture that confirms, in ARABIC, to warn those who transgressed, and to give good news to the righteous.

Mamoun Sakkal, a famous Calligraphy artist wrote in his article, "The Arabic alphabet contains 18 letter shapes, by adding one, two, or three dots to letters with similar phonetic characteristics a total of 28 letters are obtained."

He did not count the Hamza because he considered it the same like an alif, but he is mistaken here. Although the hamza is considered an alif, and has the same gematrical value like an alif which is one, it has its unique shape, the 19th shape, and can be used in a word independent of the alif. 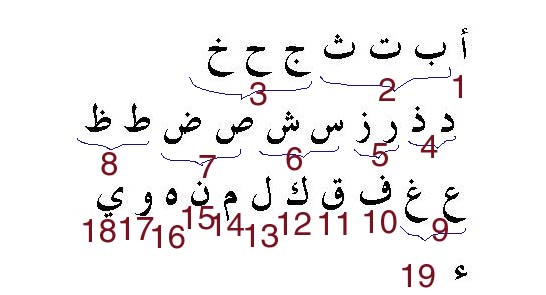 Those who know Arabic know that Hamza has its unique shape that is different than the rest of the other alphabets. It can be written totally separate and independent from the alif although in many circumstances, it is on top of an alif, a Yaa , a Waw, or under an alif or a Yaa. Using it by itself independent, makes it the 19th shape. e.g.

, this in addition of using it in the middle of the Quranic words without an alif as an independent alphabet:

The first writings of the Quran did not have the Hamzas. The hamzas were added later about the year 786 by Khalil Ibn Ahmad al-Farahidi, but they are a major part of the mathematical miracle of the Quran. The addition of the Hamza is the same like adding the numbers to the verses of the Quran, both were destined to be added in the future by future generations, but all their aspects were already calculated and counted by God Almighty, as a part of the miracle of the Quran discovered by the messenger of the covenant.

[72:28] This is to ascertain that they have delivered their Lord's messages. He is fully aware of what they have. He has counted the numbers of all things.

Praise be to GOD